Patience... is a virtue

At least this is what I was taught growing up, and I practice it unlike so many millions of other people.  Everybody seems to need to get what they want 'right now,' which seems to be how they are being raised.  This is, whether we want to admit it or not, the backbone of American Capitalism and is drummed into the heads of our children starting at  very young age.  Just think what would happen to the economy if people starting waiting... just a little bit.  Nothing.  Well, it might grow at a slower pace then Wall Street wants, they, like everybody else, wanted it to rebound from the recession with a "BAM" not to slowly build itself back to where it was.  You need to think about it the same way you think about the teeny, tiny tomato plant you put into your garden in the spring.   No matter how much you would like to go out two weeks later and find plump, juicy tomatoes hang from the vine, it ain't gonna happen.  Everybody seems to have a plan to 'jump start' the economy because so many want the jobs we lost to come back fast, but it ain't gonna happen. 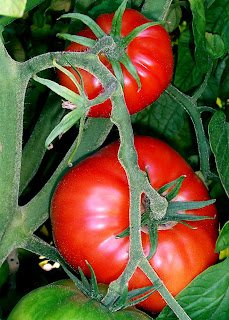 No one has ever snapped their fingers and added a couple hundred thousand jobs, yet that doesn't stop  politicians from both parties from spewing out a lot of bullshit.  We got into this mess because too many people didn't have the patience to wait, they wanted it and it had to be now.  Back when I was young the tag line on commercials aimed at children was "be the first on your block."  Unfortunately that philosophy has stuck, for too many becoming second nature.  As a result we stepped into a shit hole we ourselves had dug.  Patience is a virtue, it's about time we started practicing it.

Email ThisBlogThis!Share to TwitterShare to FacebookShare to Pinterest
Labels: be the first on your block, economy, patience, politicians