Why does Trickle Down Economics need to be explained, you ask?  Because there is a lot of misconception here.  Most people think that when the wealthy spend money it trickles down to the middle class whose income increases.   In return, they spend more money which trickles down to those less fortunate who, in return, also make more money.  Or, they foolishly believe that when large corporations spend, the same thing happens, creating jobs.  Quite often when people speak about the propensities of Trickle Down Economics they like to illustrate their point by using rain hitting the branches of a tree and trickling down.  In a way they are correct, rain water does trickle down but as it does it moves outward, away from the trunk and the roots.  You see trees have a drip line. 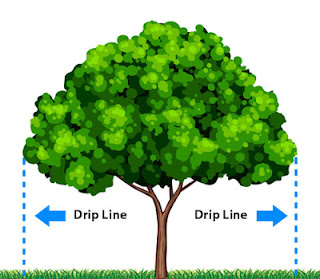 " The dripline of a tree or shrub, which runs around the perimeter of the canopy, outlines much of the root zone. Focus water there."

This means that if you're a root on the inside of that drip line you're not going to get too much drippage, it's those roots on the outer edge's of the canopy which make out.  The next time you have a rain shower go out and stand under a tree and see how wet you get.  This is how Trickle Down Economics really works.  The idea would work well if we were living in the 1950's when almost everything bought in the United States was made in the United States.  However, the minute we began importing a majority of our consumer goods that drip line started moving farther and farther away from the trunk.  In the world of 2012 it's is not just consumer goods which effect the drip line, out-sourcing jobs has taken that line and moved even farther from the trunk.  When International Paper / xpedx shut down my department and outsourced 28 plus jobs to Krakow, Poland that trickle went with them.  It's only when there is a long, steady soaking rain that the ground around the trunk of a tree gets wet.  For Trickle Down Economics to work the wealthy need to start spending money like it's going out of style; throwing a party in South Beach once a month doesn't do it.  One party a month is the equivalent of me walking into a drought stricken Oklahoma corn field and pissing on a corn stalk.  Does this give you an idea as to how many parties the wealthy need to begin throwing?