Now tell me, wasn't that the shitiest Fourth of July this country has had ever?

I worked.  Gained 1.6 pounds.  Sold a flooring installation and a blind measurement, all the time checking for news updates on the shooting in Highland Park, Illinois.  I've been to Highland Park.  Affluent is a nice way of describing the suburb.   Six dead.  Oh, and there was another mass shooting in Philadelphia, where two died.  I believe there were others, but those are the 2 that come to mind.  Thanks to the 2nd amendment cultists, this is the new normal.

Locally, a domestic disturbance near the Walnut Street bridge in Harrisburg led to a panic.  People took to social media shrieking, "no shooting! no shooting!"

My nephew and his wife were at a parade in Mechanicsburg where someone set off fireworks, which led to a panic with people knocking people over as they ran to safety.    This is the new normal.  How do I know it's the new normal?  She posted some asinine comment on Facebook that they went for ice cream afterwards to calm their nerves.  Yep, the new normal.  Ice cream fixes everything... well, maybe not in Highland Park.

Everyone will be touched by this violence.

Here's a current pic of my dahlias, more are preparing to open, and the marigolds are finally beginning to fill in. 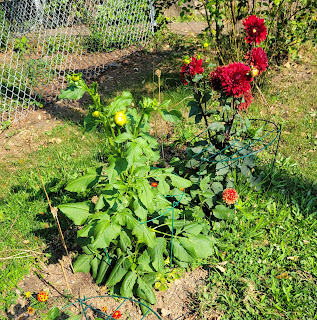 Another example of the New Normal is Darren Bailey, a Trump backed candidate for Governor in Illinois.   In the first video message he released after the shoot, Bailey said that we need to pray for the victims, and the police, and then basically 'move on.'  He's another one Conservative asshole who has yet to realize all of their prayers have remained unanswered.  Nope, not a one.  God has evidently turned a deaf ear towards those prayers.  Anyway, someone must have told Bailey he sounded like a stupid sack of shit, so he released another video in which he said he didn't mean to sound like a crass, failed human being.  You're too late, Darren.  People already know you accept these shootings as the New Normal, and people just need to move on when they happen.