The Lady Lillian on the Stairs

Late start today, not because I slept in, I had breakfast with my brother.  The conversation was interesting.

Weather wise, today our temp is supposed to max out in mid 90s (F).  The A/C is ready to go.  We might have hit the mid-90s once or twice before this summer, but a no time were forecasters predicting more than one or two days in a row.  This forecast is calling for daily highs in the mid 90's for the next week.  All of the heavy heat seems to be staying south of us.

I saw where a celebrity couple made headlines by getting married.  Nothing says ROMANCE like a drive-through, midnight wedding in Vegas.  I wonder how much alcohol was involved in the planning of that extravaganza.

Lily has developed a new habit of sitting halfway up the staircase.  I don't if it's because it gives her a better viewpoint of the downstairs or not. 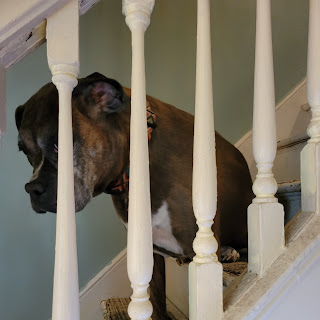 \
They began picking Steve Bannon's jury yesterday.  The last I heard was that 8 jurors had been selected.  Four more to go.  I understand the rumor is going around that he actually showered, shaved, and got his hair cut for his little dance with justice.  Maybe he thinks prettyfying himself up will lower his jailtime.
After breakfast, my brother, a Trump supporter, told me he didn't think Trump should run for 2024, that such an attempt would only be about his ego.  It sounds as though the Orange Anus is losing a dedicated supporter.  My comment was, "Trump's killing the Republican party," got no response.  As for me?  I'm hoping that lunatic announces his candidacy much sooner rather than later.
And finally, Joe Walsh the Republican, rather than Joe Walsh the musician, in an interview with Salon has said that if and when Trump gets indicted, there will be a violent reaction from the far right.  Okay.  I hate to ask this, but is there anybody out there who doesn't understand how much the idea of Trump going to jail will piss them off?  American will get to see the MAGA version of the Black Lives Matter protests, only they will be much more violent.  Whereas the Black Lives Matter protests were about inequality injustice, the MAGA's protests will be nothing more than retaliation.  The MAGA's do not understand their anger will work against them.