We had rain last night.  Now I won't have to water my little garden.  Right now, we have fog. thin without even the hint of a wisp.  I do get to work today.  That will be fine.  Last evening, I had the taddiest bit of a sore throat and wondered if I should use one of the Covid tests I got from the government.  I didn't.  This morning the soreness is gone.

There are mosquitos in the house again this year.  I think they fly in when I let the dogs out.  Last year I burned citronella candles to keep them at bay.  Honestly, I think any candle will work.  I will have to do a little research on that.

For some time now I've been thinking that I need to set the record straight, not that it's crooked, or bent by any means.  Still, there is a bit of information I feel you should know.  I have 2 protagonists in my books:  Eli, who tells the story in first person, and his partner and companion in life, Max Sullivan.  I originally wanted to call Eli, Levi after my grandfather, but I just happen to know 2 other people with that name, so my main character became Eli.  As for Max Sullivan?  He's named after a ginger cat of mine who lived to be 21 years old.  He was always a bit of a smartass and never failed to let me know he was in charge of every situation.  So, I thought I share a picture of his best side, his butt. 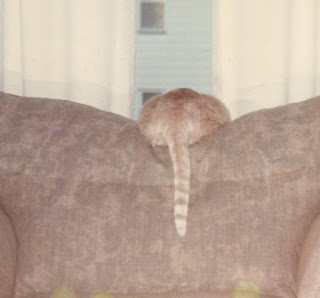 And wasn't yesterday filled with several fun surprises?  The Department of Justice revealed that there is an official investigation into Donald Trump.  Evidently, a number of people have already interviewed / testified.  Of course, the ketchup is staining the walls of which ever suite of rooms he's staying in; he might still be in Washington, or perhaps he's returned to haunt his New Jersey golf club.  Oh, and his attorneys have filed some sort of bullshit about his being 'immune.'  Well, that won't fly far.  Isn't it nice to know that he's feeling desperate?
Here in Pennsylvania, Dr. Oz is failing to close the gap between he and John Fetterman, no doubt because Fetterman turns out to be a genius when it comes to snarky attacks, like the one with Steve Van Zandt:
As for that far right extremist Doug Mastriano.  He's having issues mostly because he's already spit out so much negativity he thought was going to set the record straight burning his ass across almost every media outlet.  Pennsylvanians don't like him.  This is a good thing, a very good thing.