For the Vampires of Wall Street

Well, let's all say hello to a slow, holiday Sunday morning.  One of the dogs is still in bed.  The other, Lily, has relocated down to the sofa, which is pretty much the same thing.  Oh, wait, Biggie just got up, time to get him outside for his morning pee, and then it will be med time.  He's taken to liking his gabapentin smothered in ketchup.  Yummy.

If you were betting, we were going to get rain yesterday, you'd have lost.  All of the storms were way to our south.  Temp wise, if we hit 90 (F) we were lucky, and today's temps are predicted to be a few degrees lower.  0% chance of rain.  We have pretty much the same forecast for tomorrow as well, of course tomorrow I work so I'm neither celebrating, nor concerned.

As for working on the 4th of July?  Foot traffic will be mild in the morning and early afternoon; customers showing up because they believe we're going to having big sales.  Wrong.  That'll never happen, except for our appliances.  We're having a Red, White, and Blue sale, though I suspect the end result is going to be leaving corporate bluer than anything else.  Prices are constantly being changed upward.  The prices are not being cause by any supply chain issues either.  Nope.  They are all based on corporate's need to hit a 5% growth this year in order to satisfy the vampires of Wall Street.  Will prices go back down?  Possibly, but not much.  You see Americans are slowly getting used to paying more and being victimized by Big Business.

For a change, I thought I'd post a picture of Mercury.  This is the most complete shot we have our tiny brother spinning so closely to the sun. 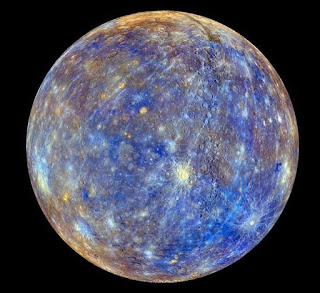 Of course, there are lots of whispers saying Trump is going to announce his plan to run for president in 2024 this weekend... though others say it won't happen until the beginning of August.  I'm betting he'll try to grab the spotlight sooner rather than later.  Some say he's doing this so soon because he believes the DOJ will not indict a running candidate.  He's wrong, though I'm sure his sycophantic advisors are telling him otherwise.  Anyway, I say more power to him.  DeSantis also has his eye on that prize, as does Mike Pence, who's too dumb to know better.  Hold onto your hats, we're going to have ring side seats to a MAGA slugfest, just make sure you don't sit too closely, though if you do wear rain gear to protect yourself from the blood splatters.