My Thursday workday has arrived.  I have a 6-hour shift beginning at 1 this afternoon.  Can you feel my excitement?

Outside, the sky is overcast.  There's only a 40% chance we will get rained.  Temps are supposed to climb to the mid 80s (F).  Checking the map on Accuweather, shows all of the substantial showers are passing us to our south, so before I leave for work, I'll have to water the little garden.

I baked sugar cookies yesterday.  First time with this recipe, which called for a heaping tablespoon of batter per cookie.  I showered them with rainbow sprinkles for a little extra sugary Pride.  They got big.  Really, really big.  They are very tasty.  I know there are some out there who will say that size is important, but... these sweet cakes are bigger than I was expecting. 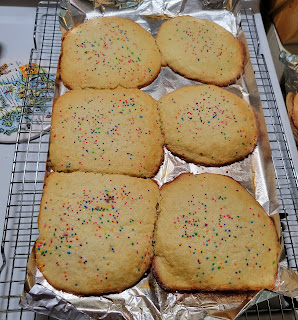 Over in the UK, the Torys are looking rather shamefaced.  BoJo, the tousle-haired Trump wannabe has resigned.  Brought down by scandals, the latest happened when one of his cabinet members drunkenly groped another man.  A blustery sensationalist, BoJo seemed to be constantly demonstrating his inability to govern.  Conservatives are a selfish lot, and in his brief tenure as Prime Minister, his selfishness was apparent.
Oh, well, the sun just came out from behind the overcast skies.  Hello sunny day.
Yesterday, up here in sunny PA, a group of Republicans, including former officials, came out in support of the Democratic candidate Josh Shapiro.  Yeah, you read that right.  Republicans are telling Republicans to vote for a Democrat.  They said that Mastriano's Cracker Jack Crazy evangelical extremism makes him unfit to run the state. This group of Republicans is doing a very good thing.  They understand the MAGA movement brings only destruction.
And tomorrow, Pat Cipollone will sit down and do a recorded interview with the January 6 committee.  He knows what questions they will ask; they know what his answers will be.  Everything has been arranged.  Will the American people be shocked by his testimony?  You can bet your ass they will.
The temps are predicted to climb into the mid 80's again tomorrow with a 0% chance of rain.
Posted by Dave R at 8:29 AM