The Universe is no bigger than one square foot

The weekend has arrived.  For those who might be confused, I'm talking about the 2 days sandwiched by Friday and Sunday, not the singer who flipped out because he didn't get a Grammy nomination a few years back.

My left thumb's a bit sore.  I'm wondering if I'm spending too much time with Elden Ring.  For a change of pace, I could always play Fallout 4 on my PC.  Speaking of Fallout, filming has started for the post-apocalyptic thriller in New York.  Here's a pic of the Super Duper Mart, one of the locations in Fallout 3. 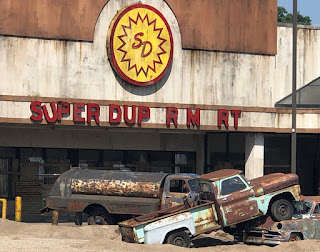 Temp wise here in Central PA, we're supposed to top our thermometers off at around 96 (F) today.  This is the hottest it's been so far this summer., of course, we still have approximately 2 months left in the season.
I saw where Justice Kagan basically said that the Court needs to keep their decisions more centrist to fit in with what a majority of Americans think and believe.  That was nice of her, of course the extremists on the court aren't even going to give her the respect of a nod.  They're too busy saying "shut up, we're in charge."
Both Tony Perkins, from the Hate Council, and Franky Graham proved the existence of brain hernias with their shrieking objection to the "Respect for Marriage Act."  While we heard a lot, sadly we didn't get a chance to see their gray matter oozing from their ears.  Be patient.  I wouldn't be surprised if we'll get to see that after the mid-terms.  You have to remember that these yokels believe God used the Electoral College to put Trump into the presidency.  I've tried pointing out that when you consider how large the universe is, and they do believe God created the universe, and the power needed for that creation vs the power needed for giving them a win through the Electoral College demonstrates a total lack of interest by God.  Of course, you have to remember that for these people, no matter how often they see pictures from the Webb telescope, their universe will never be any larger than their religion allows, which is approximately the one square foot of space their head occupies.
Finally, according to Newsweek, a conservative rag, seniors are running from Trump.  In fact, Republicans themselves are beginning to see him as a scourge.  33% now believe he is to blame for January 6, and 40% think it would be a bad thing for him to run.  While those numbers are improving, there is still a sizeable number of Republicans continue to worship his only bowel movement.