The Order of the Moral Degenerate

Hello Work Week!  Don't it just fill you excitement to know you're going to spend 8 hours today in a cube, or an office, or at a desk, dealing with issues, or people?  I know I get to go to work... for 8 hours and sit the flooring desk, and deal with customers.  I can honestly tell you that my excitability bucket is nowhere near to overflowing.  It's not even close to being full.  However, I just paid my quarterly garbage / sewage bill so today's hours will allow me to keep banking my social security checks while only working part-time hours.

Yesterday, a day I didn't work, was a day of mostly accomplishment.  I didn't take a single nap!  The lawn was mowed, laundry was done, grocery shopping completed, and the dishes?  hand washed, not popped into the dishwasher.  And I still had time for a long phone conversation with a friend to set up plans for next Sunday and get some Super Special armor in Elden Ring.

I also spent some time dickin' putzin' around with my TV.  I can't sign into Google Play Store, which is why the Paramount + app didn't update.  Shit.  I rebooted the TV, the router, cleaned up the Paramount cache.  Nothing was working, so I deleted the app and signed up for Paramount + through Amazon Prime; .99 a month for 2 months before the 9.99 charge kicks in.  I can probably live with that.

Here's another picture during my glory days in the Navy.   The date is Sept 73, which means it was taken almost 49 years ago.  I was 22 at the time. The blue thing in my hand was a piece of cloth that unraveled.  A few of us gave it a name as though it were a pet, Cleetus, if I'm remembering correctly.  Soon after it was thrown into the trash. 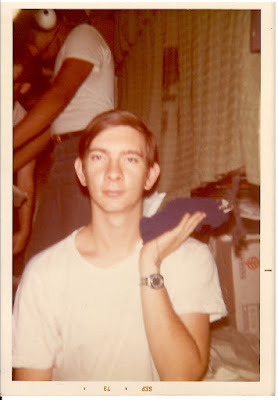 Politically, yesterday was fairly quiet.  There was a bunch of banter about Bannon's bullshit.  While most of us are smart enough to know he never had Executive Privilege, I'm sure MAGA world must be spinning on its head: a loyal member of the Order of the Moral Degenerate has lost his protected status.  Son of a bitch!  Will Bannon squeal?  Well, the January 6 committee may have to delicately parse his words to find slivers of truth as he belches out his testimony.
And finally, has anybody heard from Mark Meadows lately?  Cassidy Hutchinson mentioned him multiple times and we've heard nothing from his camp.  Could it be he's crawled so far back under his rock that we'll never hear from him again?   Or is there something else going on?