I work 12-7.  No problem.  We're supposed to showers on and off most of the day.  Right now, the skies are overcast.  I wish we would get more than a little drizzle every now and then even that means having to mow my lawn tomorrow, on the traditional day of rest.

While at work this afternoon, I will need to call a fellow associate's customer to tell them the tile they wanted is no longer available. This is a problem when customers try and cheap it out by buying clearance items.  I always make it a point to say that clearance means the product is going away.  A yellow tag means an extremely limited supply.  They can still buy the tile from our website for $22.74 a case, but they will also have to pay a $79 shipping charge.  The customer will probably yell at me over the phone and then cancel the job.  This is how life is.  Make your plans accordingly.

I got a lot accomplished yesterday because I didn't give into 'slug mode.'  Here lately it seems as though the urge to just puddle through the day has been quite attractive. Baking those sugar cookies was a bad idea.  Sugar, carbs, and me, are the perfect combination for spending a nappy afternoon.

The yellow dahlias are beginning to open. 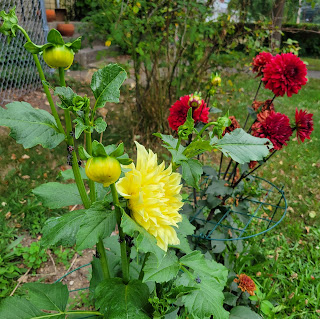 Elon Musk dropped his offer to purchase Twitter.  His attorney's provided several weak excuses, though I believe he still needs to pay a $1 billion fee for changing his mind.  I've no problem with that.  Honestly, I never believed he had any interest in the acquisition.  Personally, I think his life is pretty much the definition of a clusterfuck.  He has 11 children (possibly more) with a set of twins just being born to a woman who worked for a company he owns.  Tesla seems to be running into all types of headwinds.  Several auto manufacturers, including Hyundai, are set to leave Tesla spinning its tires trying to catch up.
The word is out that Trump is preparing to revoke Steve Bannon's Executive privilege.   Other than the joy I'd see of seeing Bannon's shitty smirk wiped from his face, I don't this as anything other than a desperate attempt by the Spawn of Satan, Donald Trump, to avoid the inevitable.
Pat Cipollone chatted with the January 6 committee yesterday... for 8 hours.  That's a long time.  Word is that he didn't deny any of the previous allegations.  People were touting that he did not claim the 5th amendment.  This is a good thing.
And, finally, the committee is now planning to continue holding hearings into August.  For those who don't understand, this is not only about putting the full evil of Donald Trump on display for all Americans to see, but also about breaking apart his MAGA base.  I don't doubt for a second one of their goals is to keep as many Trumpists from getting elected as possible.