So, the five hours I spent at work yesterday were more of an inconvenience than anything else.  11 AM to 4 PM really takes the wrong chunk out of my day.  I don't mind being scheduled in the mornings or afternoons but losing the middle of the day really bothered me.  I had no desire to either start or continue a project before I left for work, and the same was true when I got home.  The fact that the five hours I spent at the flooring desk turned out to be uneventful marriage of boring and blasé didn't help.  This happens sometimes.

Temperature wise, we did get up into the mid 90s (F).  Even though forecasters were calling for rain, we had none.  That meant watering my little garden, which has so far produced only 1 tomato and 1 green pepper.  Some of the branches on my peach tree are dying.  Son of a bitch.

There was, however, one nice surprise.  Two months ago, I had planted an elephant ear believing it would grow large, cutting down the amount of lawn I'd have to mow.  Well, nothing happened.  For two months.  I thought the plant had just died.  And then yesterday morning as I was taking out the garbage, I found this, and while it's only about 5 inches long, it's nice to know it didn't die. 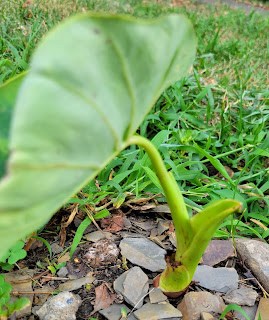 As for politics, we are heading into the summer doldrums.  Congress will be going onto vacation shortly.  Will any legislation get passed?  That's difficult to pass.  I know many are hoping that the Marriage Equality Act gets a vote.  A lot of Evangelical leaders are pushing against it, and they represent a voting bloc the Republicans have courted for years.  However, that little decision the Supreme Court made regarding Roe v Wade didn't sit well with a large majority of Americans.  Roughly 2/3 are pissed.  That same figure wants to change the rules for the court:  mandatory retirement at a certain age, and term limits.  Americans want to get rid of justices having a job for life.  I'm up for that.
And will Ginni Thomas ever talk to the Jan 6 committee.  I doubt it.  She has a fat mouth and says a lot, but only follows through if she can spread her hatred.  Married to Thomas for 37 years, her womb is evidently barren, or they made a conscious decision that birth control was essential in order for her to avoid giving birth to black children.  I do think that's the main reason.  Clarence Thomas truly does hate his DNA.