The Bitter Hatred of Clarence Thomas

I made lemon potatoes with oregano.  Not as tasty as I had hoped, thought a ton of parmesan cheese helps.

A lot of peaches were picked.  There are so many of them, they will be either frozen or turned into sauce. 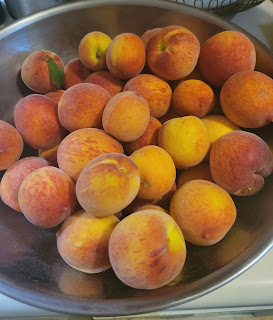 Of course, after the news broke about Roe vs Wade, I spent most of the day on either the computer or my phone.  After the leak, no one should have thought there those conservative judges were going to change their mind.  This decision further divides the country.  Remember, conservatives desperately need to say "shut up!  we're in charge!" no matter how small their minority.  This is their way of saying "fuck you, America."
While the anger is directed towards every one of the judges who side with the majority, Clarence Thomas stands above the rest in his demonstration of hatred.  He provided a laundry list of opinions he wanted overturned:  LGBQT and contraceptive rights.  Robert Reich, among many others, noted Thomas did not mention Virginia vs Loving, another ruling that set a precedent:  interracial marriage.  Being married to a white woman, this exemplifies how 74-year-old is on a personal vendetta.  He is going to make the Centrists and Liberals who objected to his nomination pay dearly. This man epitomizes Conservative hatred.
As more proof, Thomas believes the court should reexamine Griswold vs Connecticut, the ruling which permitted married couples access to birth control.  After 2 marriages, the first to a black woman, he only has one child, so either his little swimmers are weak, or he hasn't been having intercourse, however there is also a very good possibility his spouse has been using birth control.  This has nothing to do with his believing in the sanctity of the sacred sperm impregnating the holy egg.  Remember how he was conveniently hospitalized when his wife's intimate involvement in the Trump coup was going to be released?  He was terrified of being questioned, so he ran away and hid.  This man is a gutless sack of shit pushing his bitter anger onto America.
Yesterday, while the Republican party was dancing in the street, there were those who were not cheering.  Even the Orange Anus, Donald Trump, was voice reservations about the decision, rather it was the closeness to the mid-terms he was muttering about.  Because Republicans are so bound up in their own selfish wants and desires, they never take a second to consider other opinions, how women might vote this November.  While there may be many women who are stridently anti-abortion, there are many, many more who were glad that option was available.   There are also many, many women who see this decision as taking away their rights to equality, suddenly they are now more inferior and no longer have the right to decide on how to handle a pregnancy.  They are being forced into a role of submission.  This is not going to sit well with them.