Well, hello weekend for most people.  I work weekends, but then I have most of the daily, grinding week off while most people work. I got a pretty good deal, I think.

Yesterday, I planted some marigolds and cooked.  Since I will be taking my lunch to work for the next 2 days, I figured I might as well take something tasty.  It will probably come as no surprise to most of you that many associates who have a lunch break take pre-packaged, frozen meals.  There was a time when I did the same thing, but that was many long years ago.  I got tired that there wasn't really a lot of variation in flavor in meal by Marie Callendar, or Swanson.  They have a lot of fat calories and sodium issues, but not a lot of taste, so now I make my own meals and take them.  Today and tomorrow, I'm going to be dining on homemade meatloaf, and homemade scalloped potatoes.  Here's what the potatoes looked like when I popped them from the oven.  Very tasty, let me tell you. 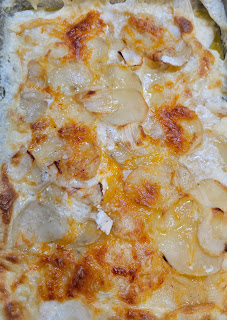 I uploaded another short vid to my YouTube channel.  This one's a bit on the new book and the cover art.  I think everybody in the world can see it.
And for those who missed it, Peter Navarro was taken into custody yesterday, not because he was fomenting the insurrection, this had to do with his ignoring the January 6 committee subpoena asking him to spend some quality time with them.  Being the old, white supremacist he is, Petey boy flipped out.  I watched about 20 seconds of his whiny performance.  That's all it took for me to realize he was cut from the same material as the orange douchebag America fired in 2020.
Is it me, or has anyone else noticed how self-destructive conservatives have become?  Because they are anti-mask, and anti-vaccine more conservatives die from Covid than any other group (it used to be black men, I believe).  Because they are so vehemently pro-gun, they are responsible for more gun deaths among children than any other group.  Anytime someone mentions the word regulation they go into conniptions shrieking "it's my right to make that decision," however, they sure do like to make the rules.  WE must not let them get into power ever again.