Monday.  I always work Mondays.  The shift is shorter.  I'll spend 6 hours at the store and leave.  Oh, and I'll take at least one 15-minute break during which I'll eat the lunch I took yesterday but didn't eat.  Why take a lunch and not eat it?  Father's Day.  They had barbecue for Fathers.  They let me eat because "you have fur babies."  And so, I did.  There was also food for Juneteenth.  Sugar cookies, cherries, strawberries, grapes, and watermelon.  I ate sugar cookies.  Quite a few.  Over 10.  Easily.  As I've mentioned before, I'm a carboholic when the right carbs present themselves.  Sugar cookies are the nefariously right carbs.  Interestingly, there was Mac and Cheese with the barbecue.  That is not the right carb.  I had a small spoonful. It only becomes the odiously right carb when I make it at home.  The small spoonful was nothing more than a tease.  Now I'm thinking of making an entire pan of Mac and Cheese.  We shall have to wait and see.

Business was slow... until 15 minutes before I was ready to leave.  Then a couple asked for information about blinds.  The wife kept saying "I'm confused.  I really need to see samples in my house."  Well, that ain't gonna happen.  Twenty minutes later she thanked me and told me they would talk about it... and get back to me.  So, I ended up punching out late, but not late enough to get an extra 15 minutes of pay.

I have a little tomato in my little garden.  I tried to take a pic, but the camera focused on Lily.  That's fine. 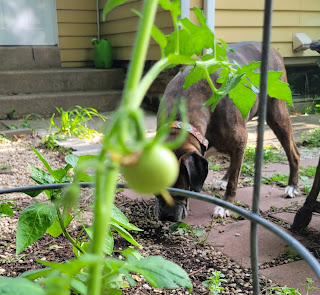 I saw that Dan Crenshaw, a Republican from Texas who nearly physically attacked extremist MAGAs.  They called him names, one of them shouting he 'needed to be hung.'  This is the base the GOP is so desperate to hold on to.  How desperate?  Adam Kintzinger has pointed out that so far Kevin McCarthy has said nothing.  Don't expect him to, at least until maybe later this afternoon or tomorrow, if he says anything at all.  Maybe he'll just run away from the reporters, like he's done before.  This party is so terrified of alienating one MAGA hate monger, they will tolerate any evil.
In another example, Shannon Boon, from Fox News, asked Mike Lee if the GOP might be out of step with the constitution regarding gun legislation.  Of course, fearful of alienating even a single one of those MAGA gun owners, he obfuscated.  You could say he did a little Texas Two Step in his response, saying there wasn't really a bill and that you can't ascertain anything without a bill.  You know what I'm talking about.  He spit out the same horse shit Republicans always spit out because they're terrified of alienating even one vote of their gun loving base.  The idea that they might gain more voters than they lose by voting for gun control isn't even something they can see in their rear-view mirror.