Finally, a bit about Susie

Hello Friday!  I'm sure there are some of you out there who are on the ready, set, go for a fun filled weekend.  Or, maybe not.  So many days are weekends for me now that I'm semi-retired.  People ask when I'll stop working completely.  My answer is always the same.  I have no idea.  At a certain age, we all realize we are all just waiting around for the inevitable, how you fill up those waiting hours says a lot about you.  I know some who began morphing into sedentary slugs the second they punched out for the last time.  I can tell you, that's not for me, at least not yet.  Perhaps when I hit my 80s.  So, I'd say I'll probably be working part-time until then.

We had some nice steady rain yesterday.  Rain is good.  Last year we had a very wet summer here and I suspected climate change might be turning us into a tropical rain forest.  That still wouldn't surprise me.  As was the case last year, there do seem to be a lot of mosquitos around.  I guess it's time to get out the Citronella candles.

I'm planning on making a meatloaf and scalloped potatoes today.  Notice I said scalloped rather than escalloped?  Just call me rebel.

I snapped a picture of Biggie sleeping on the futon yesterday.  Dogs.  If I were to sleep like that, I'd wake up with such a crick in my neck. 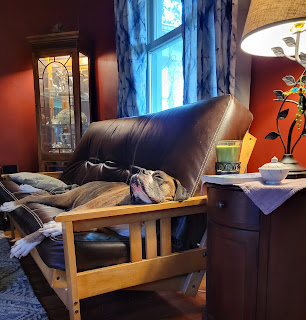 Biden gave a prime time speech last evening on gun control.  I didn't watch, knowing there would be plenty of time to afterwards to watch clips.  Will anything happen in congress?  Possibly, but I wouldn't be waiting in breathless anticipation, if I were you.  Some of the radicalized Republicans call for his impeachment, which I found funny.  Those yammering loudly were the usual suspects, the ones who tried to force an authoritarian government onto us back on January 6.  The fact that Congress impeached their lying sack of shit president twice shoves a burning torch so far up their butts they'll be sitting crooked for the rest of their lives is something they will never forget.
Somehow Kristi Noem, the wacked out government from South Dakota popped up in my Twitter feed yesterday spouting some sort of bullshit about Biden, so I tweeted back, "caught you lying... again."  Notice, I didn't point out she got in trouble for skirting the rules and regulations in order to get her daughter a job in real estate.  She's evidently taking lessons from the Orange Anus.  Anyway, there was no response, of course.
And finally, a bit about Susie Collins since she came up in yesterday's blog.  This came from the Washington Post, and while the opinion doesn't shred her, the author does not make her look... well, smart.  The fact that she has no problem working with Joe Manchin is a bit of a red flag.  What stands out is that for all of her years in the Senate, Susie has always taken the safe, Republican side and back up that position with chatter about how she's done her 'homework.'  Her standard excuse is "well, this is what he told me," especially regarding Brett Kavanaugh.  I suspect she's hoping people will think she was duped.  She wasn't.  She thought voting for him was safe.  The idea that RBG might pass and Amy Coney Boney might get pushed into the Supreme Court never occurred to her.  Playing it safe backfired, badly.  Now, there's no way she can fix her mistake and still be seen as Republican.  Instead of taking a stand, she played it safe for so many years, and now she screwed.