Tuesday morning and I slept in because when the alarm woke me up, I turned it off, rolled over, and went back to sleep.  What did finally rouse me into full wakefulness was the thought that I was going to be late for work.  That and the dogs pawing at me to let me know they had to go 'potty outside.'  The thought of being late for work was something I could ignore, the 'potty outside' could not.

Outside, the sky is overcast.  We have a 60% chance of rain today.  We had a lot of rain last summer, this year we may see a repeat.  Even so, I still need to water the veggies and the flowers, which happens daily.  I might swing over to the store this morning and pick up a few more herbs.  I already have rosemary, which is actually a shrub, but I want to get some coriander (which, for those of you who don't know, is also chamomile).

I snapped this picture of Lily yesterday, isn't she the perfect little lady?  You can see a fragment of one of her bones tucked safely into the little bookcase.  Now you have to admit, she is so ready for prime time. 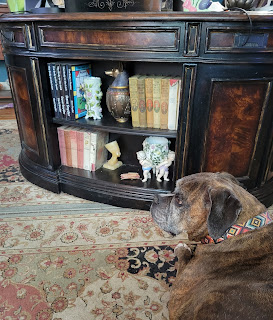 For those who didn't hear, and this news shouldn't be surprising at all, Fox News is not going to be airing the January 6 prime time hearings.  I do believe I might have mentioned earlier that they were never going to participate directly; that would be like waving their shitty underwear in public.  I didn't see if OneNews is going to carry the hearings or not.  For those who haven't heard, MAGAs are switching to OneNews because... well, their lord and savior, Donald Trump, no longer likes Fox.  Many Americans now realize that Fox News has turned into the National Enquirer of cable news networks.  This should have been expected.  Rupert Murdoch and his spawn will always fall back on that open thing that made them rich:  tabloid news.