And then there was Liz

And so, my 2nd weekend of the week begins.  The weather is sunny.  No rain is expected today.  The forecast for tomorrow is not so good.  Rain is expected.  And on Sunday as well, though I'll be working so it's not going to bother me.

My new printer should be arriving today.  This is a good thing.  The one still works, somewhat, so I'm probably going to keep using it for odd things until the toner cartridges are empty.  While we all wish our 'electronics' would last forever, they don't.  The yellow Samsung gaming laptop I bought, again, quite a number of years ago (9 to be precise), is having problems with its HDMI port.  This is the laptop I have attached to the big screen TV and is used for my Tacx rides.  There are workarounds, however.

And, of course, last night was the first Prime-Time hearing of the January 6 committee.  I spent some time looking for any kind of ratings information, none was available.  I did find a lot of commentary regarding Fox's continued attempt to foist The Big Lie on its viewers.  Someone pointed out that Tucker Carlson did the first 60 minutes of his show without a commercial break, indicating Fox is so desperate they were willing to lose money. 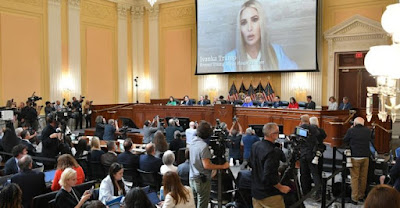 As for the hearings, I watched them.  I was impressed by so very much.  America got to watch and hear Billy Barr say the election lies were "bullshit."   I thought the juxtaposition of Trump's speech with the clips of the mob breaking into the capital buildings quite compelling.  I was impressed with Liz Cheney; she no doubt made her dad proud last evening.  Her comment to Republicans on how someday Trump will be gone, but their dishonor will always remain was stupendous.  I got a real chortle when she mentioned that Scott Perry, a Republican from Pennsylvania, had, after January 6, requested a pardon from Trump.  His spokesperson quickly called that comment ludicrous, however, she wouldn't have made it without proof.  The testimony by the documentarian was fascinating, pointing out for the first time how The Proud Boys and The Oath Keepers were working in conjunction with each other.  The police officer's testimony was riveting as she compared the insurrection to a warzone.
Last night's hearing is not going to change the minds of those who turned to Fox, it was never intended to.  It was for the vast majority of Americans, Democrat, Centrist, Independent, and level-headed Republicans, many of whom are just beginning to realize that the party of Trump has morphed into something that is craven for power.  Conservatives don't want to make America great; they just want to dictate how the rest of America lives its lives.