"It looks bad for Trump"

This afternoon, we here in Central PA are going to be celebrating summer with severe thunderstorms.  Supposedly, these storms will be bringing heavy downpours, so they've put us into an areal flood watch.  Right now the temp outside is 71 (F), with a high sometime this afternoon of around 87 (F).   That's quite a bit cooler than many southern parts of the country.  If our long range forecast hews even close to predictions, cracking 90 (F) is not in the cards.  However, we all know the accuracy of long range forecasts.

I've got a boatload of peaches again this year.  My tree has grown so tall I'm going to need to get out the big ladder to reach those near the top, unless I want to lean out of my 2nd story window to harvest.  This pic was taken at ground level. 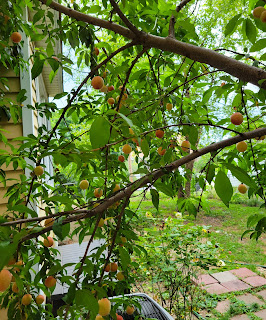 I saw where a video has surfaced of Herschel Walker saying God has multiple personalities: the Father, the Son, and the Holy Spirit.  I'm suspecting he read this in the Book of Herschel.
And, I was planning to do 2 miles on the treadmill, but I only managed to finish one; the January 6 committee hearing was more important.  The testimony was quite riveting at times.  Rusty Bowers from Arizona?  He may be a Republican, but I have to admit that man has cojones!  I, personally, might have taken a shotgun to those individuals driving around his neighborhood using speakers to broadcast that he was a pedophile.  His quote from Giuliani stating that Team Trump had "lots of theories but no proof," was damning as Hell.
The phone call between Trump and Raffensberger?  Ho Ly Shit!  That conversation is a great illustration of why Georgia is going to send the Orange Anus to jail.  Listening to it, I couldn't help but think that this loser is making shit up on the fly.  And whine.  Hell.  There was nothing thinly veiled about his threats.
Of course, the testimony of Shaye Moss and her mother Lady Ruby.  That was devastating.  I cannot even begin to imagine what it must have been like to have Trump call Shaye a 'vote scammer and hustler.'  May he rot in whatever country he runs to when the indictment comes.
Finally, I did have to laugh when I saw Neil Cavuto of Fox News saying it "looks bad for Trump."  That is an understatment.