Another slow Sunday has rolled around.  As usual, I'm working.  Sundays aren't bad.  I spend a lot of time walking around the store or sitting at my desk.  Customers wander by occasionally and I'll talk to them.  So far this week, my sales are great, I'll probably end with around $12,000, which isn't bad for a part-time associate.

I did have to deal with a white racist yesterday.  After putting some returns away, I found a large, very white woman standing by the flooring desk waiting for my associate to finish up with the customer he was working with, so I asked if she needed assistance.  She'd been in the day before to purchase flooring only there had been a problem with her credit card.  Yesterday, she was going to pay by check.  She claimed the other associate had made mistakes on her bill: he hadn't included the delivery charge, so the total was wrong.  Actually, her bill was correct.  There was nothing wrong.  When my fellow associate finished with his customer, he asked if there was a problem.  She looked at him and rudely said, "I'm dealing with this gentleman, now."  He said, "okay," and walked away.  As I was printing off her bill, she leaned forward and said, "I'm so glad I got to deal with you today."  Instead of pointing out her racism, I sent her to the Service Desk to pay for her flooring.  The associated she didn't want to deal with is a Pakistani.  When I told him what she'd said, he replied, "it's the skin."  Of course, I knew that.

Here's a rather obscure photo of me from 2001 in a money booth, of all places.  My friend Betsy is watching me not really try to catch dollar bills because most of them were fake. 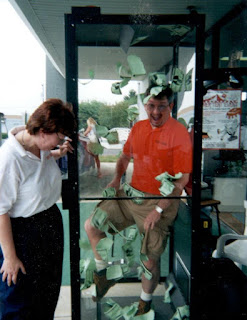 Here's a bit of humorous, speculative political news.  Trump has left Florida for New Jersey.  Florida gets stinky, winky hot in the summer and who knows what that humidity would to do his fake tan.  I also find it interesting that a number of polls have come out recently noting that DeSantis is... well, to put it bluntly, more popular with a growing number of ex-MAGA cult members.  There are whispers Republicans lean towards Ronnie because he doesn't have the boorishness and buffoonery that comes with Trump.  That must really burn Trumps ass.  That, coupled with several articles about his announcing his candidacy for 2024 leads one to wonder if he's trying to get a jump on Ronnie.  Let's face it, the candidates Trump has been endorsing are not hitting homeruns in this primary season.  While there are still Republicans in line to kiss his ass, that line appears to be growing shorter by the day.