Shall we say hello to Tuesday, and the beginning of my first weekend?  The temps are supposed to climb into the mid 80s (F), which means today is going to be a good day to mow the lawn.  I will probably be picking more peaches as well.  Is there a peach cobbler in the near future?  I'm suspecting the likelihood is strong.

When I got home from work yesterday, I waited by my car for a neighbor walking her Irish Wolfhound.  As she passed, I said 'hi.'  She nodded.  Heading slowly towards my house, I told her I'd wait until she was past to go inside because my dogs were going to be loud.  She nodded, and smiled, and said, "ah, yes, the Boxers."  That made me chuckle and wonder how many people in my neighborhood know Biggie and Lily as simply The Boxers.

I've been sorting through one of the boxes I have of old photograph.  Some I will give to my sister, others to my brother, quite a few I'm simply throwing out because they have no relevance.  You might be surprised to learn that I've taken quite a few irrelevant pictures in my day.  At least now they seem irrelevant.  Their only worth right now might be in deciphering how my brain works, or perhaps I should say worked since I'm fairly certain those little gray cells have changed their functionality several times of the years.  Anyway, when I got out of the Navy, we held a big party, lots of people, lot of beer, and balloons.  It was a celebration of my returning to civilian life.  Here's a shot of me from that night that I only vaguely remember taken when I was rightly toasted.  I loved that flannel shirt.  Oh, and I'm 22 years old, on the verge of turning 23 not 14 heading into my 15th birthday. 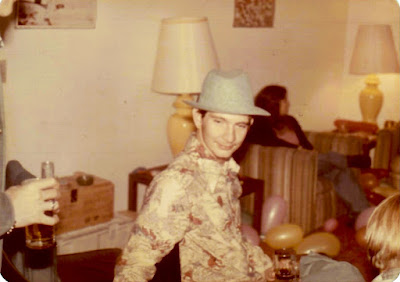 Yesterday, as I was preparing to end my shift, my sister called and asked if I had seen there was going to be a surprise witness and today's abruptly called hearing.  My sister has never been political, until now, and I do not doubt that her interest is so peaked because my brother-in-law is a raging MAGA.
I was hoping one of the key players had flipped.  John Dean Tweeted that calling an abrupt hearing witha surprised witness needed to be something earthshattering.  It turns out the witness is Cassidy Hutchinson, a top aide who worked closely with Mark Meadows and Trump.  We shall have to wait and see how much ground she moves.