Well, hell, it looks like Friday has finally arrived and temps up here in Central PA are going to be very warm, low 90s (F), though the humidity will probably be as thick as a wet sponge.  We had a loud crashing and booming thunderstorm last night.  Heavy rain, so heavy I could hear it pounding on the attic roof.  There were lots of lightning flashes, but no nearby strikes, at least as far as I could see from my 2nd story windows.  I had cleaned out a cooler and left it to air dry out back and the wind blew it off the chair.  It now has almost 5 inches of water in it. 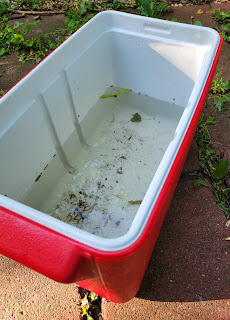 And weren't the hearings a joy yesterday?   Being at work, I couldn't watch them, however I did look at the comments lighting up Twitter.  Evidently there were quite a few flashy Holy Shit moments.  While the day is now registered in infamy, Dan Rather noted, however, that the Trump White House grew very, very polite after January 6 with so many people saying "pardon me."
As might be expected, polls are being taken on what America thinks of the hearings.  After looking at several of them, a slim majority (54) of Americans want the DOJ to prosecute the Orange Anus.  There are a smaller group, one that 'can't decide,' made of independents and a small number of Republicans, and then there are the Republicans, half of whom think January 6 was justified.  From what I'm gathering, that number is about 14%, which is still a significant voting block.   These people will never change their minds.  That's large enough to swing an election should the GOP run a popular president.  We cannot let this happen.  Vote once, and make sure you vote Blue.