Yesterday I went to my uncle Floyd's funeral, he was 92, almost 93 years old.  A long time ago my cousins and I were best friends but people's lives are not like planets, maintaining a steady orbit.  We all grew up, moved away, reorganized our priorities.
My brother officiated, he and I were the only 2 Snyders there which is interesting since Floyd's funeral was at the H. L. Snyder Funeral Home.    That's in Pine Grove.  Back when Floyd was a young man the Snyders were big in Pine Grove.  My great grandfather Robert owned 2 farms.  My grandfather, Roy, managed the Pennsylvania Power & Light power plant, he would later be promoted and manage the Allentown / Bethlehem power plant.  All that has changed.
All of my uncle's children are divorced, his one daughter on her 3rd marriage - this one seems to be working.  Her daughter Sheila and her grand daughter both wore black yoga pants with matching black leather knee high boots.  Funeral attire has changed.  Her son Ryan was there with his wife and 3 children.  He was in the Air Force and served time in Iraq.  He's a very good looking man and dressed appropriately.
Floyd's youngest daughter was there with her husband, a gent who looks like he belongs on Duck Dynasty.  When asked if anyone had anything to say about Floyd he started... and then broke down, which was very touching.  The 'girls' also said something, together.  They're called the girls because they're maternal triplets - that's right one egg, 3 girls that are the spitting image of each other.  When they were in grade school they were required to have different hair cuts so the teachers could tell them apart.
Floyd's oldest son Daniel, died suddenly of a heart attack 5 years ago.  His son was there, very quiet, wearing a gray suit.  Floyd's youngest son, Dale, was there in a suit.  He was my best friend when growing up.  He looks just like his Dad.  His 2 sons were there.  One lives locally.  The other lives in Michigan, he flew in just for the funeral... that's it, just for the funeral.  As we were leaving, so was he, heading to the airport to catch his flight back to Michigan.  One day.  Not a lot of love there.
And now a few words about Floyd.
I liked him a lot.  He drank a lot of beer, but he had a reason. 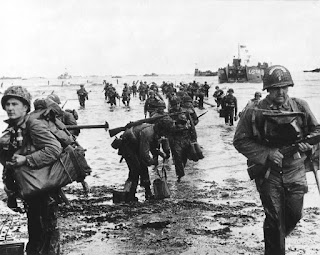 On D-Day, he was on Omaha Beach.  He had to climb through all of that death, and destruction, and survived that confusion.  Somehow he managed to earn 3 Bronze Stars.  I have no doubt that where ever he is, Floyd is enjoying a beer.  More power to him.