Well, we've got what?  Three weeks before the voters make their choice and Donald and his Trumpcapades keep skating around on ice that's way to thin for their blades.  I mean, you can actually hear the cracking of the ice as his troop circles round and round and round.  Every syllable dribbling from his lips is a counter accusation.  "It's a conspiracy."  You know, the same sort of thing he hawked with 'birtherism.'  He doesn't understand that this is his karma.  The full circle.  The universe fixing a mistake.  This is life.
Anyway, yesterday when I returned to work after my 2 days off, Christmas had been set.  All the artificial trees, the cheap ones and the expensive ones have been set up.  They're all pre-lit.  We have one that grows from 7 feet to 10 feet with the press of a button.  If I get a tree it will be real because the dogs will see it as a toy... are really bit toy, they can drag around the living room and dining room.  This means I will probably not be getting a tree this year.
I have to say, however, the centerpiece for our Christmas display has to be the Christmas Dragon.... that's right, we have a large, inflatable Christmas Dragon who slowly flaps his wings.  There is bright pink fire burning in his belly. 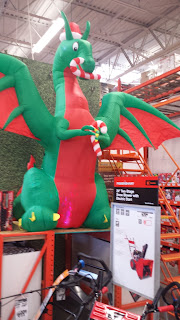 I suspect this means that the sleigh with it's 8 tiny reindeer have been replaced.  Let's be honest here, a fire breathing dragon swooping around on Christmas Eve is a bit more impressive.  No doubt he's faster.  And no doubt Santa is riding him shouting out "eat Donner, eat Blixen, eat Prancer and Vixen."
Posted by Dave R at 7:14 AM