So, I went to to visit my Mom yesterday.  She has an apartment in an assisted living facility.  She also suffers from dementia; she recognizes us, but conversation is limited.  When I tell people this, their response is usually 'aahhh, that's a shame.'  No it isn't.  She's also a Valium addict because 50 some years ago she was diagnosed with schizophrenia.  She was admitted to a sanitarium where they administered electric shock therapy.  This is how life is sometimes.  The therapy didn't help, the Valium did and the end result was the screaming tantrums, the slapping and hitting, stopped for the most part, but the damage had already been done.
Anyway, about 3 weeks ago my brother and sister packed her and her walker up and took her to K-Mart.  She bought herself a throw which looks like a puppy.  She loves it.  She talks to it.  She takes it everywhere.  A number of the other residents are a bit jealous, so she also uses it as a tool to piss them off.  When they get angry she turns on her "pity poor me act."  The staff at Graysonview know this, and they mollify. 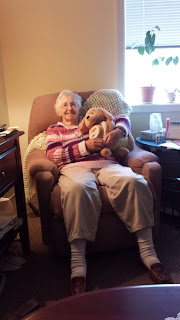 This doesn't mean I don't love my Mom, I do, to a certain extent.  I tell people that my Mom is nuts and they just look at me.  And then I tell them the funny stories, not the dark ones.  I try and visit her once week, and always take cookies, or brownies, or some sort of snack.  My sister visits her a bit less frequently, and my brother manages to make it over about every 3 weeks or so.  The damage was done a long time ago.