For Republicans, for all too long, it's not about who gets into the White House doesn't really matter, as long as that individual claims to be a Republican.  That's what counts.  Nothing else.  Read articles like this if you don't believe me.  There are a number of Republicans who don't care how terrible a Trump presidency would be, they don't care how close he'd buddy up to Putin, or how badly he crash the economy; at least there'd be a Republican in the White House.  And they hate Clinton.  But then you have to remember that they hate all Democrats.  Look how much they hate Obama.  They let birtherism go on for years because they saw it as an easy nail to drive into his back.  They've used Benghazi for years to attack Clinton, but read their report and they admit there was no wrong doing.  What they do say is that the White House dealt with it poorly, and that's about it.  Even their silly propaganda film "13 Hours" foisted a lie on the American People.  Their philosophy for far too long has been to divide and conquer.  And now they have Trump, a candidate who has helped them foster their hate for years.  And he's uncontrollable.  An open sore ripe with gangrene. 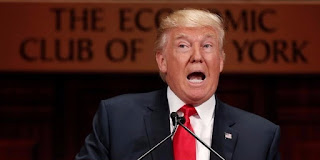 And if you think he's a waking nightmare now, wait until he loses.  Do you really think his Trumplodite hoards are going to sit quietly on their hands?  I doubt that.  Will their anger fester?  I suspect so.  Will they devour the party that created them?  Most assuredly.  The GOP will cannibalize itself from the inside outward.  When I told my brother I thought there might be riots when Trump loses he said, "I don't think they're that bad."  They are.