The VP waste of time

Didn't watch the debate... never do.  But I suspect, from what I've been reading, the LA Times sums it up best.  Pence failed to defend Trump's lies and Kaine needled.  If you watched it, well, that's 90 minutes of your life you'll never get back.  Who's it going to help?  Neither will benefit - you don't vote for President hoping they'll be incapacitated and you get someone closer to you liking in the White House.
The next debate is going to be a Town Hall.  The only time Trump is good at that format is when he's the only one on stage... or if he's dealing with the rest of the clown parade.  I suspect Hillary is going to put her vehicle in reverse and back over him again, and again, and again.
Anyway. my new xbox slim arrives tomorrow.  Can't wait.  But I'm also having new windows installed so I probably will only be able to unpack it and not really explore it's functionality.
I did watch "Westworld."  Thought it interesting.  I don't pay for HBO and have a funny feeling that's not going to be enough of a reason for me to start.  Sure, there's a lot of nudity, but most of it was female, lots of tits, you know?
Heading off to work, and since I always like to include a picture in the post I'll leave you with: 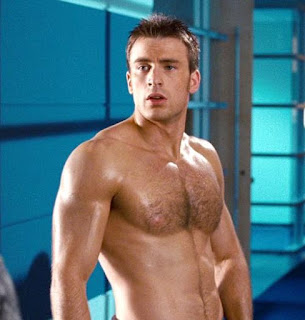 an older picture of Chris Evans,  I think this is from the first Fantastic Four movie, where he ran around in a towel because hid hotness burned off all of his clothing.