Two for the Road

Well, they just finished delivering the 3 tons of pea gravel I ordered last week; all part of the plan to get the dust out of my house, well, not all of it, but to slow it down in a major way.  On dry days, when the dogs are out playing, dust just billows up and into the house.  This is the remedy, I hope. 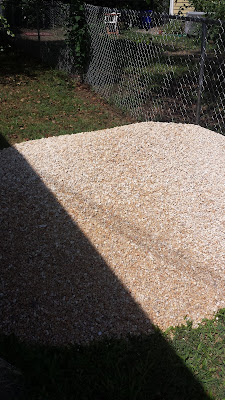 On a lighter note, the GOP is coming apart at the seams.  Reince Preibis evidently is very, very angry, furious, apoplectic, pissed (take your choice) that Trump will not endorse Paul Ryan.  There's word about that some high ranking officials are thing about having an intervention... and Trump's people are saying one is not necessary.  One of the names being bandied about as part of this team is Newt Gingrich.  See the humor?
What the GOP doesn't realize, or perhaps doesn't want to realize, is that there is only one person in this whole wide world who might be able to talk any kind of sense to Donald Trump.  The problem is Vladimir Putin is not a Republican.  But you all know in your hearts that if Vlad did call and tell Don to tone down his rhetoric old Don would say, "sure thing baby."  They are close you know.  I know because this picture proves it. 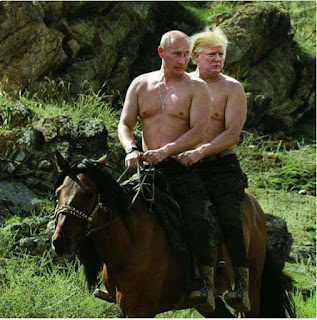 Of course, I might be wrong. This might all be happenstance.  Perhaps Vlad was just riding his horse shirtless (as he most always does) and saw Don standing shirtless along the road, and, of course, when Don saw Vlad he probably stuck out his thumb and asked "Going my way?"  And of course Vlad would have nodded and said, "hey, jump on board and I'll give you a ride."  But then again, maybe this is just an excerpt of the continuing GOP soap opera nightmare.  Think of it as American Horror Story with a Russian twist.... except this versions funny.