Ann Coulter, Trumplodite of the Day

Let's be honest here, there are some funny things in life... and then there are some really, really funny things in life, and one of the funniest things to happen in a while is Ann Coulter's reaction to Trump's flip-flop on immigration, in fact it's so funny I'm going to nominate her for the Trumplodite of the Day award.  You see, Ann, the ever greedy capitalist, realizing that Trump might provide a field day in royalties wrote a book celebrating Donald Trump.  You see she expected all of his racist Trumplodites to buy her book because of his stand on immigration - all the illegals were  going to be kicked out.  But then he flip-flopped just as she's starting a book tour.  This means she's probably not going to cash in the way she was expecting.  I mean who's going to buy a book in which she quotes Trump as saying one thing, when now he's saying something totally different.  This is bad for her since this change of heart makes her look... well... stupid.  I mean, she actually wrote a book.  Now, people are making fun of her, and it is funny. 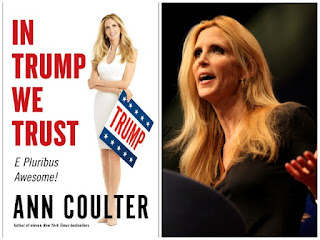 This is what's called Karma.  All the hate she's been spouting for years is coming back to bite her in the ass.  And what takes this funny thing and almost makes it hysterically funny is that it never occurred to her that those loyal Trumplodites don't read.  Books have words... and things like commas and periods in them.  Not that she cares if they read her books, they just have to buy them.  This is why she is our Trumplodite of the day, because she thought she'd make a buck off pedaling Trump's hate monger message... and he... well, changed the message.