And in the Center Ring we have... Reince Priebus

I've only actually been to the circus twice, once under an actual 'big top' tent, and the other time in an arena.  The big top was better because it wasn't that big so there was really only one ring you needed to watch.  At the arena they actually had three rings laid out, with different shows going, sometimes simultaneously in all three, and, since we were in an arena, we were much farther away from the action.  Currently the  Republican Party is running their own circus, and thanks to modern media, they only have one ring, and everybody is watching that one ring.  They don't have any side shows with which to distract your attention, and that is killing them.
First of all, way back when, we had their clown parade of candidates and Reince Priebus was the ringmaster.  Then, however, instead of giving us the 'daring young man on the flying trapeze,' he gave us Donald Trump - clown asshole at large, and old Reince has jumped right into the center ring with Trump.  This is quite bizarre when you consider that Reince was in charge back when the RNC released their Growth and Opportunity report in 2013.  I don't know what he did with that report, maybe used to to wipe his ass, maybe used it to line a bird cage, or most likely, used to to wrap up Romney's loss and throw it out with the trash because he's totally ignoring it.  And, up in Erie, PA, it played the good ringmaster and introduced Trump to his adoring hoard of Trumplodites. 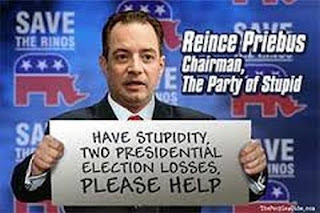 Where's the popcorn?  Where's the cotton candy?  Cause this old elephant is trudging around the same old ring.  The jokes are growing tired.  In an attempt to shore up the party's failed hate message Reince is moving into the center ring.  You see, he will do anything to get the party into the White House... anything.