A little night music with Florence

Normally, August in central Pennsylvania means hot, dry weather, the grass long since turned brown for lack of rain, which is why I always take a week's vacation - but not this year.  Humidity reigns.  This August seems to be our rainy season, torrential afternoon downpours are now part of our daily routine, and I'm not talking about a short-lived, 10 minute storm, the rains easily drench us for 30 to 40 minutes.  Nothing every really dries.  The insect population is thriving, let me be more precise, the blood sucking insect population swarms around you the second you step outside.  I had planned to finish up on the veranda... well, that might not happen.
Anyway, I went to see "Florence Foster Jenkins" last evening.  It was very good.  How good?  Can you say "nominations?"  Plural.  Many.  Lot's of them.  Streep's Madam Florence is endearing.  Even though she has the musicality of a rock you understand her sincerity, she loves music.  A scene where she and Simon Helberg play the Prelude in E Minor is magic.  And speaking of Helberg, he's amazing.  Watching him play piano while Florence sings is the definition of comedy, it's almost like watching slapstick without the slap.  Then there is Hugh Grant.  I've never been a fan.  He's always seemed to play fluffy, pretty boy parts, even as he's aged, however, this might be the one role which defines him as an 'actor.'  He is perfect as St. Clair, an over-the-hill Shakespearean actor who seems to have discovered late in life that he has a soul. 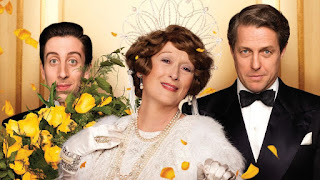 And in case you're wondering, and haven't seen the movie, listening to Florence Foster Jenkins sing is excruciating; if you weren't laughing so hard you'd be in unbearable pain, and it's not because she's just a little off pitch, or that she's taken a meat cleaver to her phrasing.  Her vocalizations are a Christmas present to those millions of tone deaf people who are oblivious to the fact that they can't sing, and in her reckless abandon those artless notes become... well, art, as she proves that music is in the ear of the beholder.