Before I head out for work, I thought I post a couple of comments about Trump's Pennsylvania problem - it's huuuuge!  In fact, his problems are so bad in this state he's already singing the 'voter fraud blues.'  Even though we are seen as a battleground state, we almost always vote in a Democratic president.  Right now we have a Democrat in the Governor's Mansion.  None of this is good for Donald.  Still, he's been saying that if he loses Pennsylvania the election has been rigged.  This is a consistent whine from Republicans, especially in states they're losing, the fact that they might be turning off enough voters to lose elections never occurs to them and so the election is always rigged, it's always stacked against them.  Bullshit.
While polls may seem to be frivolous at times, they do imply trends.  In Pennsylvania, those people most likely to vote this November 8, are trending towards Hillary in a big way.  Because of this, he's already complaining.  Be prepared, his complaints are going to increase.  I suspect that his little Trumpadoodle mind can even conceive of the fact that he's going to most likely lose.  The concept that people of education, people of color, people of gender, and people of race might actually vote against him is truly alien. 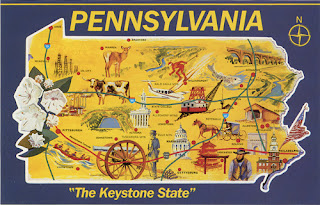 What the Republicans really need to do is get themselves an audio-animatronic Trump with a recorded message to keep him on point to keep him spewing out their hatred for people of education, people of color.... and, well, you know who I'm talking about, everybody who isn't a Republican.