I get to go to work today... for just today, since tomorrow I'm scheduled off.  For the next few weeks schedules are going to be a little more erratic then usual.  Christmas is coming.  Because I'm in retail, and because the large home improvement retailer I work for is making heaps of cash, we've been working 40 hours during holiday weeks and also getting our holiday pay.  That comes to a screeching halt with Christmas and New Year's Day.  I don't mind.  32 hours a week is fine with me.

Presents for the dogs were ordered yesterday: another fluffy duck and another rubber chicken.  They're only getting one each this year, mostly because they don't play with them the way they did when they were younger.  Now, they're more interested in getting treats.

Yesterday I got so much accomplished.  I was rather pleased with myself.  Even a little project I had been working on was wrapped up, for the most part.  A while back I had ordered a teeny, tiny table for behind my desk to hold CD's, and a nice little speaker system.  White, and made of OSB, I knew I needed to improve it's appearance.  So I spray painted it and tiled the top.  This is what it looks like now.  A vast improvement.  I have some spare tiles I'm going to glue around the edge, probably tomorrow, to finish off the job. 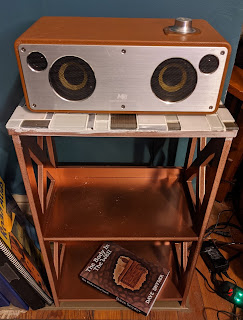 I understand the Idiot Jerk gave some sort of interview yesterday... and lied.  What else is new.  This man will lie from here to Hell and back... well, maybe not back.  He might just find a nice, toasty chair to sit in, on the left hand of his father.
And Biden made some news, too.  No, I'm not going to bring the hairline fracture in his foot.  I'm talking about his all female Communications Team.  Do you hear that rustling sound, like dried leaves scrapping against dying twigs?  That's old, white, Republicans shaking their heads in dismay.  Their decrepit beliefs hate change, they'd rather stay stuck in the drying mud of time hoping some will survive antiquity to become fossils.