Well, my mini-vacation ends today.  Tomorrow it's back to work.  Can you hear the excitement in my voice?  Probably not.
I raked and mulched yesterday, however, there are still a lot of leaves still clinging to the trees.  Here's a short video in which you can see and hear my leaves falling.  I had something longer, but the file was too big for blogger.
I do have to admit I really do like the scent of autumn in the air, the smoky aroma of wood fires being lit, and I don't mind the leaves either, they don't really die, just recycle themselves.  This is what nature is, the constant recycling of life.  That old bit they still say when people die, "ashes to ashes, dust to dust," is horseshit since we start off as neither.
I received my copy of Assassin's Creed, Valhalla yesterday.  You get to choose to play as either the male Eivor, the female version, or a version in which you flip back and forth between male and female.  They want you to play the latter.  Me?  I'm going to butch it up and play through as the male version.  The fact that the voice actor giving him life is a ginger, Danish actor named Magnus Bruun has nothing to do with it.        Nothing. 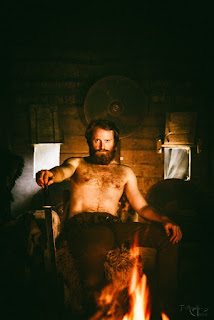 I saw where slowly, every so slowly, more Republicans are beginning to tell the Idiot Jerk it's time to move on.  Rubio and Toomey joined the chorus yesterday.  Of course, a number of them see an advantage of having the Idiot Jerk in the White House drag his feet.  The more he slows and disrupts the transition of process, the happier they are, for them this is about making life difficult for Biden.  They don't understand they are dealing with a loser who is consumed by power.  The longer he fights this, the more difficulties he causes, the worse their Brand begins to look.  They have become the mirror reflecting his soul, and it has cracked.
Posted by Dave R at 6:07 AM