Can you believe it's Tuesday?  Yesterday, I realized we had less than a month to go before our days started getting longer again.  Now, won't that be nice.

We were talking at work about how many people aren't doing anything special for this holiday.  Thanksgiving was a holiday which has been out of proportion for years.  Americans do tend to lean to the excesses in life.  We went from just having family gatherings to mini-events.  We went from having a nice meal to setting up mini-buffets without spit screens.  There wasn't just one or two deserts, but 8 or 9.  The human stomach is only so large.  And football.   We suddenly got Big Games on TV.  I can remember many occasions growing up, where the men thought every male in the house needed to go out and toss a football back and forth... and talk about the Big Game.  I hate football.  Never liked it.  This year, thanks to Covid 19, many Americans are dialing back Thanksgiving.  Maybe this is a good thing.  Maybe bigger is not always better.  Maybe the holiday should go back to its roots, about giving thanks, and not about crowding 40 people into a house so you can eat in waves.

I cheered yesterday when I saw Emily Murphy decided to approve the transition process to the Biden presidency.  The Idiot Jerk claimed he had sent her a Tweet authorizing her to begin.  She said she had made the decision on her own.  The Washington Post has a copy of the letter she wrote to President Elect Biden.  This woman is a bitch.  Did you like the bit where she claimed even her pets received death threats?  This woman is an Idiot Jerk loyalist who refused to do her job until mounting pressure from both Republicans and Democrats forced her to do something she was very loathe to do, allow the transition to begin.  She, like her boss, will be bitter to the very end.

And, of course, there are those saying the Idiot Jerk is already making plans to run in 2024.  Just say he managed to keep his sorry ass from being charged with a felony, he be campaigning, not against Joe during the primaries, but Mike Pence.  That's right, android man has his own dark desire to sit in the oval office.  That competition should be very entertaining.

Finally, supposedly this is what the original Thanksgiving looked like.  If this is true, where's the buffet? 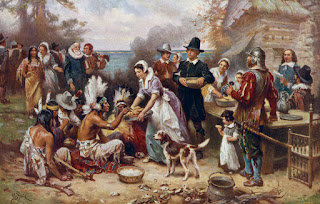