The Party of NO

For me, yesterday was very relaxing.  I did a load of laundry, or two, spent a lot of time napping and reading the news.  The dogs and I went for a nice walk.  There was cake and ice cream, vanilla, no chocolate... dogs you know.  Dinner was a BLT.  In normal times, I'd have gone to the movies with friends.   The need to party hardy scene has long since gone.  No hangover, just a sense of a calm and quiet this morning.

This morning Pfizer announced a Covid vaccine that was 90% effective.  Interesting how they put this forth to the public almost a week after the election.  This was most likely done to avoid politicization by the Idiot Jerk in the White House.

And in The Body in the Loch, Eli and Max have just started their visit to the Rehab Center... wait, was that a spoiler?  At least I didn't tell you someone wears a wetsuit.  Shit!  Did I really write that?... (Can you hear the sound of evil laughter?)

I understand the Idiot Jerk in the White House is planning to hold recount rallies in states he believes he won.  This really has more to do with feeding his ego rather than changing the outcome of the election.  He doesn't understand that recounting can actually benefit Biden but then, in reality, he has never been too damn smart.  Four bankruptcies prove he has always been more of a loser than anything else.  Like a truly bad executive, he has continually blamed someone else for his bad decisions.  He is now, and will always be a loser.  The party of Lincoln is no more.  He has stripped it of what ever tattered honor it had remaining after the Reagan debacle.

With a Democrat in the White House, the failed Republican Party will once again become the party of NO.  Their hatred will build a wall to prevent unification of the country.  They don't want a United States of America, they want a tinfoil dictatorship.  Never forget this.

Finally, as I was out in the yard yesterday with the dogs, I saw I still had roses blooming... in November.  Now, isn't this pretty? 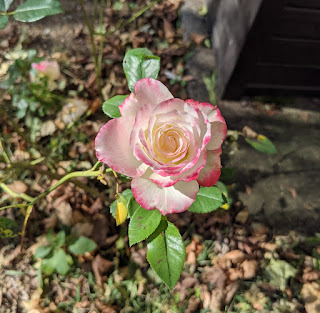 Email ThisBlogThis!Share to TwitterShare to FacebookShare to Pinterest
Labels: Covid 19, Democrat, Donald Trump, Party of No, Pfizer, roses, The Body in the Loch