Can you believe tomorrow is Thanksgiving!  Holy Hackensack!  I did decide that I am going to be making desert - a pumpkin cheesecake, or at least my version of that tasty treat.

I had a customer yesterday who basically wanted to put a extremely large area rug in his unfinished basement.  We don't do area rugs.  We don't do specialty rugs.  He wanted something inexpensive so his children could play inside.  We do sell area rugs that are 8 x12 (feet).  That's not what he wanted.  He looked at our rolled carpet and talked about having us cut something 12 x 17 (feet).  So, he talked about having the carpet cut in 5 foot sections and asked me how you seam them together. When he asked me how you seam them together, I told him I don't know.  He got frustrated and said "but you sell carpets!"  And I replied, "yes, but we have a 3rd party that does the installations."  This is a customer who expected us to fulfill the picture in his mind.  That rarely happens.

Even a half-hearted glance at the political party of the Idiot Jerk will tell you they're in trouble.  Even though the transition has begun, he is still Tweeting daily about voter fraud.  His reality twists itself tightly around conspiracy theories.  His base, believing everything he says, is going deeper and deeper into Crazy Town.  The rest of the party realizes they need to move on.  Cracks and schisms are appearing.  There's a group advising Republican voters in Georgia to write in the Idiot Jerk's name in the runoff election.  Now, how stupid is that?  Not only has he worked to divide the country, he's also tearing apart conservatives.  He is the destroyer.

For those of you keeping score, Pat Robertson was wrong.  The Idiot Jerk didn't win and the End of Days is not upon us... at least not in the way he was talking about.  Unless you've been living under a rock, this little story has been growing in popularity... around the world.  While counting sheep in Utah, the occupants in a low flying helicopter discovered something... in a canyon.  A metal monolith.  Shades of 2001, A Space Odyssey?  Though in that Science Fiction classic, the first monolith was discovered on the moon.  Is it a transmitter, or a receiver?  or just some art exhibit gone slightly Off course? 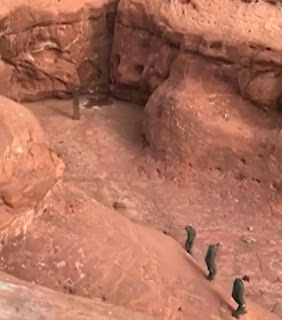 Whatever it is, you can bet the Idiot Jerk will most likely try and claim responsibility.