Faust in the House

Joy of joys!  I get to go back to work today!  Though I have to admit, my job isn't really that difficult.  We're heading into the slow season.  Sure, there are going to be those few who want to have their new carpet or laminate floor installed by Thanksgiving (too late) or Christmas (there's still time), and don't understand that Covid is surging... wildly.  Installations might slow down, which will irritate people to no end.  This is how things go.

I had breakfast with my brother yesterday.  He is Cracker Jack Crazy for the Idiot Jerk in the White House.  In his mind, the turd still floating in the White House toilet was Sent to make the country Socially Conservative.  He has no idea this is how evil grows. By building support among those who accept and excuse intolerance they judge wrong grows.  He didn't believe me when I told him the Idiot Jerk in the White House would relocate to most probably Russia because his presidential immunity disappears the second Biden is sworn into office.  Lessons will be learned.

And I did begin painting the hallway yesterday.  I like the color, a shade of green which coordinates with the color I used on the staircase.  The only problem?  I had picked up some Purdy rollers that were on sale because 'cheap' sometimes wins out.  These rollers, however, were made for rough surfaces like cinderblock and the nap soaked up the paint.  So, today before I leave work I'm going to pick up a couple which will work well on smooth, plaster walls.

There was an interesting opinion piece in the Washington Post explaining why so many Republicans were sticking with the Idiot Jerk even through all of his baseless claims of voter fraud.  Isn't that funny?  His base will not vote for the Republican candidates in Georgia's run-off election simply because they're Republican if he doesn't support them.  This doesn't surprise me.  The GOP will need to grow even more corrupt in order to maintain a majority in the Senate.  My take is that the Senate will be split.  50 /50.

And finally, a bit of humor.  The gun totting McCloskeys are suing the photographer who took this photo, saying it has ruined their lives. 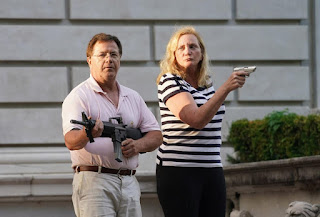 Maybe someone should have told him that open necked pink polo shirts and AK47s don't go well together.  And as for her... at her age she should have long since learned horizontal stripes are never thinning.  Perhaps they should be suing their stylist instead.