Well, the hallway is painted.  The walls, at least, though there are few spots which will need touching up.  Towards the end of the job there were a few moments when I was concerned about how much paint I had left.  The last thing I wanted to do was run to the store to pick up quart to finish the job... no problem.

I did yardwork in between coats (I always put on 2 coats of paint).  Rather than mulch the gingko leaves this year, I raked them all over into a compost pile.  We'll see how that works for next year.

French Toast was also on the menu, yesterday.  A long, long time ago, on the night before I left for the Navy, my Mom told me she was going to make me breakfast... what ever I wanted.  I told her I wanted French Toast, and she told me "I don't know how to make that."  Sad, but true.  She was not a big one for cooking.  My grandmother on my father's side gave her a nice Betty Crocker Cookbook since my Mom couldn't cook.  I did get French Toast for breakfast, but I do believe I had to tell her how you made it.  Here's what mine looked like yesterday. 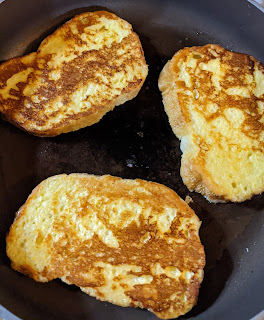 And I guess the Idiot Jerk in the White House received more bad news yesterday.  The states are going to scuttle his tinfoil dictatorship.  Awfully quiet he's been for the past 2 weeks, hasn't he?  Except for the Tweets and the Rudy and Sydney sitcom he's been rather silent.  Supposedly no one knows what he's doing.  Personally, I think he's working behind the scenes to finalize his move.  I'm not the only one thinking that.  Edward Norton and I seem to be on the same page, though he likes using poker metaphors.  Sometimes silence is not a good thing, especially when it come to the Idiot Jerk.  He has no loyalty to America and states, other than New York, are going to come gunning for him when his immunity runs out.  With other presidents, there used to be a 'call log' recording who was visiting the White House.  Not so with this one.  We have no idea who's been paying him private visits.
And what about Donny Jr having Covid.  I find it interesting that supposedly he was diagnosed on Monday... and we found out on Friday.  There's something going on there, too.
And, finally, the woman who's holding up the transition?  Emily something or other, the loyalist?  She claims to be worried she's going to be fired if she starts the process.  This is odd, I think, since she's going to be losing her job in 2 months anyway.