Is this a dream?

Sunday, and I slept in an extra hour.  I had an odd dream about being a resident in some sort of house.  There had been a party with lots of food.  The time came for me to go to bed and I couldn't wait to wake up to see what food was left over.  When I woke up, everything had been put away.  No food.  So I made a pot of coffee and lit a cigarette. The dream was rather depressing, and when I checked the headlines on my phone this morning I saw the Idiot Jerk's campaign was asking for another recount in Georgia.  Son of a Bitch!

Yesterday was an odd day at work.  We were fairly busy in what my Mammy (yes, that's what I called my grandmother on my mother's side) the forenoon.  I cut a lot of carpet.  There were the odd questions.  I couldn't wait to leave, and when I got home I made egg salad.  Perhaps that was responsible for the food in my dream.  I didn't write anything, but did play more Valhalla.  I did win my first flyting contest.  Flyting is a ritual poetic exchange of insults.    There are some famous Norse poems involving the god Loki and flyting.  I never thought I'd be trying to verbally abuse someone with poetry in a video game.

Of course, a Federal judge in Pennsylvania smacked back at the Idiot Jerk's appeal to throw out every ballot in the state.  In response, the Idiot Jerk's henchies were hoping to take the case to the Supreme Court.   For those who don't know, this is how sedition works as he and his team constantly fuel the anger of his base.  This is why the Republicans packed the Supreme Court.  This is what evil looks like.  The blame for this falls directly on the shoulders of those who didn't vote in 2016, the ones who sat home.  By doing so, they opened the door to those who desperately want to destroy our democracy.

Finally, it's time for the dogs to get their walk in, and after that a dumbbell work out is on the calendar.  The exercises marked in orange are those on the workout.  Believe me, it's fun! 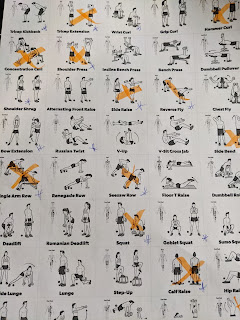