So, it's Sunday.  I don't work.  Still, I will be working around the house.  There are leaves that need tending to, and a single load of laundry.

I don't know if any of you remember the old man who had the complaints about his carpet installation, the one who wore his MAGA hat, and shirt, and his faced mask with the Idiot Jerk's portrait, but he showed up at the flooring desk yesterday.  He started going on about his installation, and how we didn't tell him there were going to be seams, and how we screwed everything up.  That's right, I, another associate, and a couple of customers got to see him as a bitter old man.  So, I quietly pulled on my manager pants, the ones I took off almost 3 years ago and stood up.  I told him he had already discussed his issues with upper management and a resolution had been reached.  He began yelling again, so I cut him off, repeating myself.  When he started up again, I stated a fact,  "This conversation is over," and sat back down.  He stared at me for a few seconds and then walked away cursing.  After my fellow associate had finished up with his customers, he turned to me and said "Wow, that was amazing.  You never sound like that."  I just smiled and said.  "I don't take shit from losers."

My brother sent me a text telling me he was dealing with his election despair by watching Hallmark movies.  From one fantasy world to another, eh?

And what about that loser in the White House.  I understand that failed despot has admitted Biden won the election... by cheating.  That man is stuck in some sort of conspiracy world theme park.  The only reality he has is the one he is constantly creating.  Had he won another 4 years we'd have found ourselves in Hell's Fantasyland.

As I was letting the dogs out one last time yesterday before going to work, I saw I still had some freshly blooming roses.  Now, isn't this pretty? 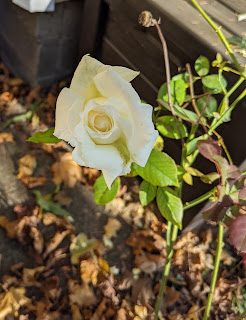