Straight for the Gutter

Can you believe it?  Today's Friday.  For me, it's Thursday.  Tomorrow is my Friday!

I got the new external hard drive yesterday and am in the process of slowly transferring things from the old drive.  Excruciatingly slow.  As I'd said, the old drive is dying.  It's starts transferring, and then stops, and pauses.  Sometimes it continues, but more often then not it locks up.  Son of a bitch.  There's no problem with smaller files, but movies and games?  I'm either going to have to find some other way to do the transfer, or write them off.

We were slow at work yesterday.  Translation:  I'm doing things in the aisles to keep busy.  You know?  Physical labor.  I'm making things look nice.  We're not doing a Black Friday this year.  That doesn't mean they're not cluttering up our aisles with... stuff.  Dog beds went out yesterday.  I know a lot of people who own dogs.  One of our associates was talking about buying one for his cat... that's right, his cat.  Before I got my dogs, I had cats.  He's wasting his money.

I understand the Idiot Jerk in the White House hit the airwaves last evening... briefly, before the networks started shutting him down.  MSNBC was the first... after something like 21 seconds.  I'll bet that pissed the Hell out of him.  He doesn't take losing well, which is why he cheats.  This man has been cheating his way through life for far too long.  Like many cowards who cheat, he will run away rather than crash and burn.

The fact that Biden has now flipped Georgia is pissing off a lot of Republicans.  Pennsylvania is going to flip sometime this morning. And the Idiot Jerk?  He's like a freaking pinball heading straight for the gutter.

Anyway, the whole thing should be over today.  The MAGAs will be furious that they've lost their liar and thief.  The Republicans are only beginning to understand how the Idiot Jerk has tainted their party.

Believe me, things are looking up.

The dogs were all excited when the learned they were going for a walk this morning.  They don't remember they go for a walk everyday.  Keep in mind, they're much smarter than your average Republican. 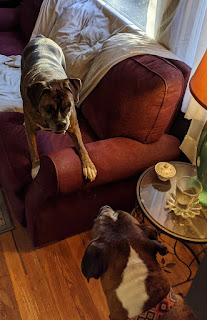