My Friday has arrived.  I'd say I'm ecstatic, but relieved is a more fitting description of how I'm feeling.  I had having split days off.  Starting Friday, the real one, however, I'm scheduled for split days off into December.  Son of a bitch!

And yesterday was an odd one at work.  I was the only Specialist scheduled.  Only one aisle associate was scheduled, so after he left at 2 PM, I was left by myself until my shift ended.  While not being retail appropriate, I was lucky because business was slow, most likely because the temps are dropping.  And it was windy.  Many, many of my leaves blew away yesterday.

And I mentioned to a fellow associate, a supporter of the human failure in the White House, how interesting it was that since he lost the election many Republican Governors were now mandating masks.  I am not alone at recognizing this.  The WP is one of several of the 'lamestream' media outlets reporting this.  Guess who looks bad?  Not the Blue states which have managed to somewhat control the virus.  Nope!  It's the Red states, the ones who's ICU's are filling up as I type.  For those how haven't realized it yet, the Idiot Jerk's legacy will be Covid 19 and his total refusal to deal with it.  His party doesn't understand the mantle they are cowering under will stain them for history.

Michigan was hoot yesterday, wasn't it?  Two Republicans were refusing to certify the election results because... they love to believe in lies.  Not surprisingly, their decision was met with an onslaught of anger and outrage.  You see, the Idiot Jerk lost Michigan by 140 - 150 thousand votes.  No small margin there.  When he heard about it, he Tweeted some sort of celebratory nonsense, however shortly after his Tweet those 2 Republicans reversed their decision, making him look like a fool.

The Idiot Jerk also had bad luck in Pennsylvania where a Federal Judge as his Court Jester Giuliani what reason they had for trying to disenfranchise the state's 6.8 million voters.  Evidently Giuliani jingled his bells, while doing a little song and dance,  As have been so many judges dealing with this spate of fraudulent charges by the Idiot Jerk, this judge was unimpressed.

For those interested, my Christmas Cactus is once again preparing to bloom. 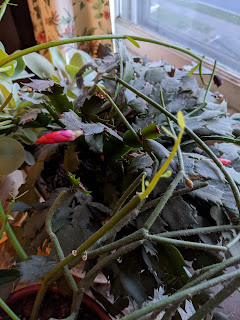