The dark side of 'none of the above'

Well, hello to a brand-new week, hopefully one filled with accomplishments.

If I have to tell the truth about yesterday, well, I was pretty much of a slug all day.  One of the bad things about living with dogs, who normally sleep 18 hours a day, is that they are ready to doze away an hour or so the minute you say the word nap.  I try to avoid taking naps on most days, not yesterday, though.

Loading the Rosetta Stone course for German into the new PC is the only thin worth mentioning.  I bought the course 11 years ago, back before Rosetta realized they could make more from subscribers than from selling a course with 5 discs.  Like most Rosetta language courses it's terribly weak because they give no rhyme or reason as to why things are done, however it is good for working your accent.

I did snap another picture of some of my tulips. 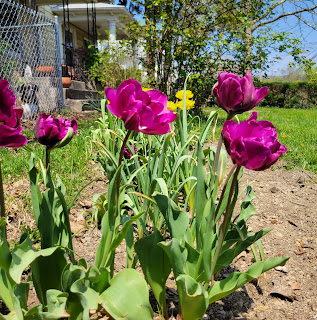 I saw in Le Monde this morning that, when it came to voting for either Macron or Le Penne, 3 million ballots were left blank, which is the same as saying "none of the above."  While indignant voters may believe this to be a good way to protest, it really says more about failure than anything else.  Had Le Penne won, she would have started making dramatic changes; a president can do horrific damage in just a few years.  Take NATO.  She hates NATO, as does Putin, as does China, as do most wannabe authoritarian governments.  This is not because NATO is bad.  Nope.  What most people don't realize that when problems arise, like the Ukraine, NATO joins forces and becomes the Largest Super Power in the World.  A united NATO has the largest GDP, they have the largest army, and... they do have nuclear capabilities.  This is why Sweden and Finland want to join NATO.
Speaking of the Ukraine, I saw where  Russian ground forces are again running into problems.
And, finally, I saw that Kevin McCarthy is traveling south to the border today.  Why, you ask?  Because Kevin knows the MAGA base doesn't care if he is covered in shit as long as he feeds their hunger with tons of anti-immigration red meat.  With the rest of the country looking at him and saying WTF, he is desperately trying to hold onto the base.