2nd day with the new computer.  Remember when you could switch your browser with just a click of a button?  Not anymore.  Microsoft doesn't want you using anything other than Microsoft, something I don't want to do.  Google is easier to organize, whereas Windows 11 seems cumbersome, oh, and I hate that their favorites are now on the right side of the screen.  One of the really good things about this upgrade is that I've decided up update my passwords.  That was challenging at time, but... well, most of them were 10 to 15 years old (son of a bitch).

Yesterday, the weather was fine.  The dogs and I spent some time outside, they laid around soaking in the sun while I pottered, without Harry (stop groaning).  The lawn was mowed.

I do have to work today, which is good.  There are a few things I want to pick up at the store, like a bag of dirt.  One of those elephant ear plants might make it into my shopping basket as well.

Sunday is a scheduled day off.  If I don't finish the most recent edits on The Body in Repose this evening, they'll be done on Sunday.  And then the manuscript is off to the final editor, yippee!

As I said yesterday, I made egg salad.  Here's a picture of the prep. 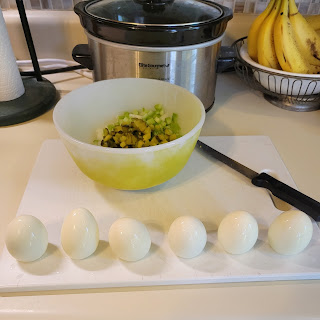 I saw where that dimwitted governor Abbott has rescinded his truck search.  In a stunt which was supposed to embarrass the administration, he ended up looking like a losing fool.  In reality, he created a useless blockade that had fruit and vegetables starting to rot in trucks.  His AG, Kenny Paxton, said it was a success.  You know who Kenny is, don't you?  The Texas AG who has soooooo many legal issues?  Who's being seriously investigated?  I wouldn't be surprised if one of these days we hear that Kenny is going to retire to Puerto Vallarta.