A new work week has arrived.  Notice my exuberance.

They are forecasting rain for my weekend, which begins tomorrow, with high temps in the mid 50's (F).  Hopefully, I'll get some yardwork in between the showers.  Dahlias need to go into the ground in the front yard.  Lots of tuplipy things are sticking out of the dirt already.  And there are the dahlias.  My peonies are also sticking their buds above the soil.  And, of course, my roses are filled with budding leaves.

The Grammy's were on last night.  Meh.  I didn't' watch.  Pop music is so ephemeral.  No matter what you might want to believe, the timeless songs are very few and very far between.  Time has no problem burying trendy musical hooks.  I got into a discussion with a gent at the store about this very subject, and he said "look at all the great things Beyoncé is doing with music!  She'll be around forever!"  I replied, "they said the same thing about Madonna."  And he said, "What?  she's old!"  And I said, "precisely."

And tell me, does this look like the face of the most evil man on the planet? 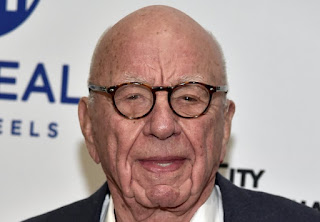 I saw where someone had Tweeted that Joe Biden said "Rupert Murdoch is the most dangerous man in the world."  I believe that's a rather precise definition.  At 91, he maintains control over Fox News, and this bitter, old man has always desperately wanted to be a key player in politics.  He was a problem in the UK that was only solved by a legally forced separation: he was basically buying politicians.  The same thing is happening in the US with the Republican Party.  Here he buys them with frequent appearances on Fox News.  His mouthpieces are pro-Putin, and pro-Republican, spewing out lie, after lie, after lie.  As a result, the GOP, much to his delight, relies upon him.  That is precisely what he wants.  If there is any joy in American politics, it's that the political party he owns is blindly stabbing itself in the eye, and in the back, and in the foot, and, thanks to Loser #45, in the heart.