That's fine with me

Well, a happy Sunday morning to everybody out there.  I am starting 6 consecutive days away from work today.  If I were working fulltime, I'd call this a Staycation since I'm not going anywhere, however, since I'm a part-timer now, I'll just call it a a non-scheduled work week.  I'm scheduled again next Saturday, the same the Kid's Workshops restart.  Can you tell how excited I am?

The temps today are forecasted to reach the high 70s (F) to low 80s (F), so I'm betting I'll be turning on the window A/C units upstairs.  We might get a late afternoon thunderstorm, again, that's fine with me.  My outdoor plans as limited.  Tomorrow the temps are supposed to drop back into the mid 60s (F) for the rest of the week.  I can deal with that, too.

I'm thinking of extending the veranda by the side of the house.  That would be laborious, which means it's a good way to burn calories.  Burning calories is always good.

One of the things that I realized as I was moving files to the new computer was the number of pictures I have of Lily.  While I talk a lot about Biggie, the shots I have of her vastly outnumber the pics I have of him.  He was not happy, so I took this one as he shot me the stink eye while he brooded away on the futon. 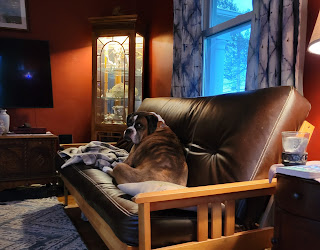 The French election is today.  Le Pen is close enough that she could swing an upset.  People will vote for her because they hate Macron and his mask and vaccine mandates.  The fact that Le Pen has some serious ties to Russia, and Trump's blow bro Vlad doesn't even cross their minds.  They aren't even considering that if she were to win, they might end up with some 'friendly' Russian troops stationed in France to 'help keep the peace.'  For them, the bright side is not having to worry about mask or vaccine mandates, and they are far worse than Russians in Paris.
We have the same problem in America; people not wanting to wear masks or get vaccinated.  That's fine with me.  We now know that unlike chicken pox or mumps, Covid has no lasting immunity.  Like the common cold, you will get it again, and again, and again.  I know of 3 people in my store who've had it twice, and for 2 of them the second time was worse than the first time they had it.  The one person who had milder symptoms the 2nd time had chosen to get vaccinated.  I'm getting my 2nd booster on Thursday, which is fine with me.