Welcome to Friday... one of my days off.  Yesterday, we had a lot of rain.  We've had April showers on and off for several days now, however yesterday the rain was steady.  There were times when, sitting at the flooring desk, I could hear downpours pounding over head.  Of course, that meant I got to hear the occasional customer complaining about 'all of this rain.'  We've had this showery, drizzly, not quite rainy weather for about 3 days.  If we weren't getting the rain, and their lawns weren't rapidly turning green, these same people would be complaining about 'how dry it is!'  Why do so many people feel the need to whine?

I had an odd night's sleep.  Restlessness.  Not quite dreaming and not quite sleeping.  Politics seemed to play a big part, not solid thoughts I could focus on, and not disturbing at all, more like a silent presence that kept causing me to roll over.  I'm sure part of the reason was my PC.  I have a CyberPower gaming PC upstairs which is between 7 and 8  years old.  In computer years, that's old.  My last PC was a Dell and that worked well for about 6 years... and then died a sudden death.  Prior to that I had an large iMac which lasted 14 months before the hard drive decided to consume itself.  Rather than let that type of history repeat itself again, I've been looking at getting a new PC while this one is still on it's last legs.

And, of course, yesterday another type of history was made.  Ketanji Brown Jackson became the first black woman join the Supreme Court. 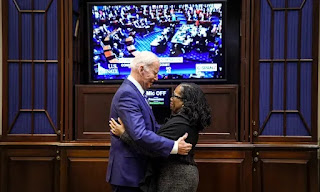 I was at work when they vote was held, though I watched later.  One thing that stood out in the joy of that moment: the sight of bitter, white Republicans walking silently out of the chamber like spoiled 12 year-old losers.  They have no decency, no respect for anything they cannot dictate.  History will look poorly on them.  They will clutch and grasp onto the past with their old, dying hands until time buries both them and their beliefs.