Work 1 day, and then off for 6.  That's my schedule beginning today.  I'm happy with that. The weather is supposed to be rather unimpressive: tomorrow and Monday temps will be in the mid to upper 70s (F), but then there will be storms again and the temps will drop.

Yesterday, I rode over 11 miles in Norway, along a fjord.  Very Nice!  Today, prior to work, there will be a fast walk on the treadmill.  That's all I will ever do, fast walks, 3.3 - 3.6 miles per hour.  I will never break into a jog, or sprint.  That's running.  I ran when I was in college.  I really hate running.  I have a friend who runs over 100 miles per week.  He goes into the zone.  I was never able to hit the zone, mostly because the one thought racing around my mind was "I hate this shit."

I made it toasted cheese sandwich for lunch yesterday, not tomato soup, though.  Still, it was tasty as hell. 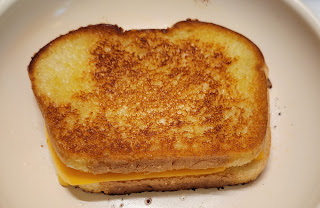 One of the writers for Newsweek, Jeffrey Toobin, said yesterday that DeSantis was going to win his war with Disney.  Y'all remember Jeff?  He also writes for the Murdoch owned New York Post?  He's also the guy who was put on leave by CNN for playing with himself during a Zoom call.  People on that call got to see a little jerkin'.  Anyway, Jeff's preachin' that America is fed up Liberal values being shoved down their throats.  He evidently has no problem with those on the right shoving their conservative values down America's throat.  Like so many people in this country, Jeff doesn't understand that America is Centrist.  The culture wars being brought by the Ultraright are an attack on that Centrist position.  They are attempting to shift America into a Socially Conservative Zone they can dominate.  I really think that what Jeff needs to do is to give up his day job, and go back to simply playing with himself.