Wow, I cannot believe my weekend has arrived already.  Seems like only yesterday I went back to work... for a day, and here I am with another 2 days off.  In two weeks, I'm taking more than just a mini vacation, more than just 3 days in a row.  I've taken myself off of the schedule for a full 5 consecutive days.  This semi-retirement thing seems to be working out quite nicely.

And I saw this about the Kardashisluts this morning and thought Bob might find it amusing, I know I did.  It seems like the Kardashisluts are being sued by a former Kardashislut who claims they ruined her career (or something like that).  Jury selection for the trial began yesterday and potential juror, after potential juror, spewed the ugly truth about them.  Evidently many, many people are biased against these whores, and they had to sit in the courtroom and listen to people calling them trash.  Of coure, being publicly slapped by the little people will change nothing. I had a good, hearty laugh out of it.

Something that's been flitting across my brain for the past week or so concerns the Russian invasion of the Ukraine.  Not the fact that it's killing thousands of innocent people, which it is, rather it's the realization that the longer the invasion drags on, the more incompetent it makes Putin look as a leader.  This is especially true when you understand he believed this was only going to take a few days.  The longer this war continues, the more a loser he looks like.  Should he resort to weapons of mass destruction, he will be defined as the ultimate loser.  The world will both hate him, and mock him, as the ultimate failure.  The world will see him as nothing more than a tiny man with a Napoleon Complex desperate to prove he's as tall as... well... as Xi. 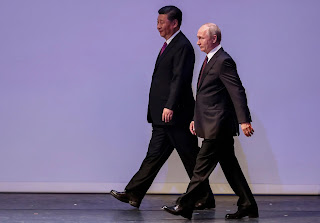 Finally, I got another big hoot this morning when I saw that Marjorie Taylor Greene is spitting bullets because the lawsuit to take her off the ballot is proceeding.  I do not doubt for a second that reality is going to slap this bitch multiple times, not that she will ever learn anything.  To do that, she would have to realize she's nothing more than a shit stain of a human being.