And... the work week begins.  I have a 6 hour shift.  Somehow, I think I'll be able to struggle through those hours.  Business will be slow.  Day after the Super Bowl, you know.  I don't doubt many people imbibed too much last evening.  Not one to fixate on tribal sports, my evening was dry.  I watched the half-time show this morning.  Even though I don't listen to most of the artists who performed, I will admit to getting a bit teary eyed at times.  This was representation on such a grand scale.  And for those who missed it, Eminem took a knee.  Thank you, Eminem.  For those of you who thought you were hearing the roar of applause as he did so, I have correct you.  While there was the roar of applause, there was also the background rumbling of white, Conservative heads exploding. 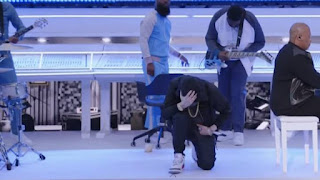 As for the rest of yesterday, business, as expected, was slow.  There were maybe... 3 customers in the store when I left.  When I got home, I fed the dogs, and played a video game I download.  Oh, and I also ordered Assassins' Creed Valhalla for my Xbox Series X.  I like that game.  Perhaps I've always wanted to be a Viking.  Here in America, our history glosses over the Vikings, we're not taught how influential they were in Europe.  They had settlements up and down every coast line.  Most people don't understand, they reached Paris.  So, quite possibly, if you have European ancestry, you... might possibly have Viking DNA tracking through your genome.
Evidently, another GOP from Texas has had to pull out of the upcoming election.  It seems Brad Namadar was soliciting female sex workers, one twice. She reported him.  Why is it you never see this shit happening to Democrats?